Club on campus getting into the “swing” of things 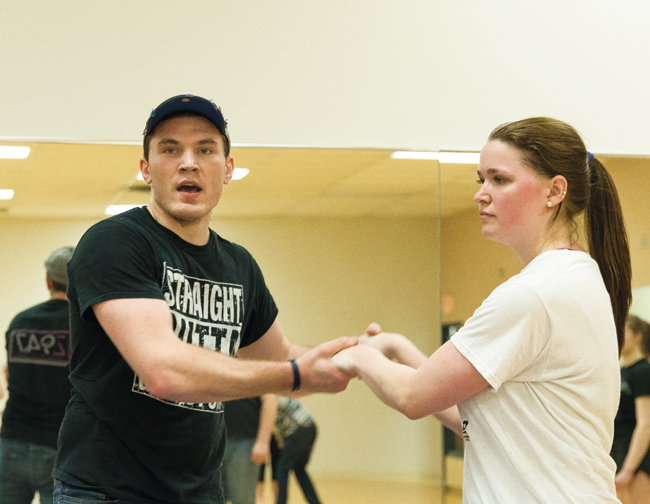 The University of North Dakota has many clubs and organizations operating within its system. One club in particular that has had trouble maintaining activity, is the Swing Club.

The Swing Club was once available at the Wellness Center, operating late in the evenings for the convenience of students who were too busy during the day. Now, after a few semesters on hiatus, the club has returned and relocated to the Hyslop Sports Center.

Club instructors, Tyler Bye-Jehs and Emily Makaruk, open the swing club at 7 p.m. and finish up at 9 p.m. on Thursday nights. With the numbers of participants being consistently high, the two may add additional nights to their schedule.

In the past, the club had trouble remaining available to students. Bye-Jehs believes the reason for this is due to poor planning and management.

“I was never a part of the old swing club,” Bye-Jehs said. “That had faded before I had even begun to learn to dance. To my knowledge, the people who originally ran the club had graduated. Because they never taught anyone how to lead the club, they stopped having meeting which lead to people not showing up.”

Together, Bye-Jehs and Makaruk have organized a system so the club will avoid any future discontinuations.

“What we’re doing differently with the new swing club, is we have developed ways to make sure the club remains continual,” Bye-Jehs said. “As we’re running it this year, we’re also training in people to take over in the years to follow.”

Although never a part of the old club, Bye-Jehs feels having a plan for each session is the key to the success of any club.

“Music starts at around 6:50-7ish,” Bye-Jehs said. “At around 7:15, after people have warmed up a bit, I’ll make an announcement. For those who are new, I’ll state who the instructors are and the goal of the club and so on. After that, I’ll take a group in need of learning basic steps into a separate room to practice, while more experienced members can dance casually in the main room.”

In addition, Bye-Jehs noted that the beginners portion is optional to participants. The room reserved for casual dancing will also play songs that are traditionally use for line dances.

Both Bye-Jehs and Makaruk, encourage all students to participate, as it is a fun and unique skill to have. It also gives students something safe to do on campus, if they’re not wanting to go downtown.

“We want to create an environment where people are able to come and dance, but also provide lessons for people who want to learn,” Bye-Jehs said. “People come to have fun, while also making it a good way to meet new people.”

Both instructors believe anyone can dance, as long as the passion and practice are there. Understanding from personal experience, Bye-Jehs knows rhythm isn’t something that comes naturally to everyone.

“When I first started dancing, I had such bad rhythm,” Bye-Jehs said. “I could tap the steering wheel of my car, and lose the beat instantly. But over time and practice, I was able to progressively get better. Eventually, I got to the point where I didn’t have to think about my moves, because of the muscle memory I developed.”

Bye-Jehs remembers going to Shotgun Sally’s, a place known for its food, drinks and entertainment, and using his honed skill to experience what would later be one of his favorite dancing moments.

“People dance there all the time, so we decided to swing dance,” Bye-Jehs said. “By the end of the song, people were cheering and we even got a shout out from the band performing that night.”

There is an admission fee of $5 for the entire semester. If anyone has any questions or wants to know more information about the club, there is a Facebook page provided with answers.