Recruits ready to fill the gap 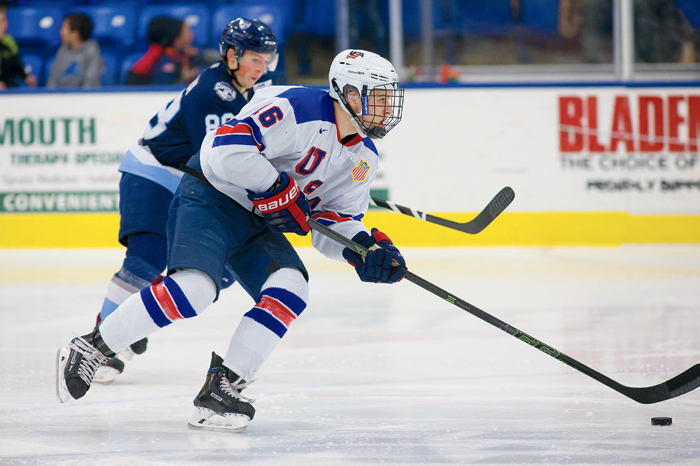 Grant Mismash committed to play for the UND men's hockey team in Nov. 2016.

As the 2016-2017 University of North Dakota’s Men’s Hockey season comes to a close, the team looks to bounce back next season with a refreshed lineup.

Since their final game against Boston University, several UND players from this season have not only signed NHL contracts, but have already started playing in games for their respective teams. These players include forward Brock Boeser, forward Tyson Jost, and defenseman Tucker Poolman.

Many of the question marks for the remaining players who would potentially sign have been answered.

First with goaltender Cam Johnson confirming over twitter early last week he had more to prove and would return for his senior year. Later, Media Director Jayson Hajdu confirmed in a tweet Wednesday morning that Austin Poganski and Shane Gersich have decided to stay for another season.

Even with the return of major players there are still spots to fill and the Fighting Hawks have over twenty prospects committed to playing for North Dakota during the next few years to fill them.

Currently, there are two goalies who have committed to play for UND in the coming years. Peter Thome played in the United States Hockey League last season and is expected to be a freshman at UND starting in the fall of 2017. Thome joins current UND goaltender Matej Tomek, as the few goalies to be drafted in the NHL to attend UND as he was picked up by the Columbus Blue Jackets in the sixth round(155th overall) in the 2016 NHL draft.

Originally from Minneapolis, Minn., Thome posted a 2.65 goals against average and .901 save percentage for the Waterloo Blackhawks last season.

In the fall of 2018, Adam Scheel, goalie from Lakewood, Ohio will start his freshman campaign at UND. Last year, he played for the USA Hockey National Team Development Program, a program that recruits the most talented American hockey players under the age of 18 and cultivates their skills as a unified team. For the National U18 team, Scheel had a 3.79 goals against average and .873 save percentage.

UND also has seven defenseman who are committed to play hockey next season and beyond.

Defenseman who have committed to play for the Fighting Hawks as freshmen in 2017 – 2018 include Matt Kiersted, Gabe Bast, Jonathan Tychonick, and Josh Rieger.

Matt Kiersted is from Elk River, Minn., with a season record of two goals and 12 assists for the Chicago Steel in the United States Hockey League last season.

Gabe Bast, a Canadian player from Red Deer, Alta. played defense for the Penticton Vees in the British Columbia Hockey League last season, where he scored twice and had six assists. Additionally, he had nine points in just 10 postseason games for the Vees.

The Vees have produced quality players for UND including the most recent freshmen, Dixon Bowen, Colton Poolman and Tyson Jost.

Josh Rieger of Regina, Sask. currently plays for the Estevan Bruins in the Saskatchewan Junior Hockey League. He finished his season with 13 goals and 28 assists and averaged over two penalty minutes per game played.

The SJHL has provided players to UND that include goaltender Matt Hrynkiw (Humboldt Broncos) who was the most recent recipient of the NCHC Sportsmanship award and defenseman Danys Chartrand(Flin Flon Bombers).

Mismash and Mattson were drafted in the 2016 NHL Draft with Mattson going in the fifth round(126th overall) to the Calgary Flames, as Mismash was selected by the New York Islanders in the sixth round(170th overall).

Players with promising potential include Jordan Kawaguchi, who scored 38 goals and 47 assists last season for the Chilliwack Chiefs of the British Columbia Hockey League.

Grant Mismash played on the US development hockey team last season, and scored 23 goals and 21 assists. Mark Senden played part of last year for the nearby Fargo Force in the United States Hockey League, where he notched five goals with six assists.

There are six months between now and the start of the 2017-2018 UND men’s hockey season. During this period, the team will continue training their returning players while introducing some of the prospects mentioned above to the organization.

A handful of these prospects may one day be destined for the NHL, but until then, they are given the opportunity to proudly continue the University of North Dakota’s rich hockey legacy.