USA women’s hockey gets a raise 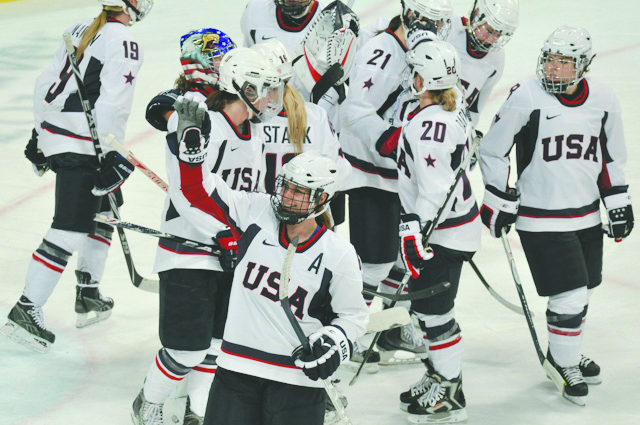 After long negotiations and a protest of the upcoming world championship, the USA women’s hockey team is getting a raise.

For those who don’t know what has been going on for USA hockey, nothing is an understatement. While the NHL is highly considering not letting NHL players support their country on the greatest of international stages that is the Olympics, the U.S. women’s hockey team boycotted playing until contract negotiations were settled.

The players were planning to protest the upcoming World Championships this week due to not only the unfair pay, but the poor accommodations compared to the men’s international team.

“So many people around the country, not just in sports, responded to us,” forward Meghan Duggan said, “and I think it was because we were showing what women who stand up and fight for what they believe in can achieve. Especially when we stick together.”

The pay of the women’s wasn’t the only thing being protested by the team. There were several other factors that needed to be addressed.

Now the women will receive possibly six figures, if they bring home the gold. By the fourth year of this current four-year deal, they will have $950,000 in a compensation pool for the players.

On top of getting paid, the women will now travel with the mens team equally. Before, the men’s team would fly business class while the women would be stuck in coach. Now the travel arrangements are equal to the men, including an increased pay for non travel days at events from $15 to $50. Also included is an escalator clause, which means if the men’s perks increase, the women’s will as well.

Also added was a Women’s High Performance Advisory Group, which will give the women more of a voice within USA Hockey.

Personally, it’s about time this happened. It’s no surprise this issue took so long to be corrected. Equality in pay is still an issue in this country. The U.S. women’s soccer team is still trying to improve their pay/benefits.

Before this deal was made, the women were paid $6,000 for six months which averages out to $1,000 a month. What’s sad is that’s how much I made in one month working at a retail store this summer. Olympic athletes were getting the same monthly rate of pay as a college student working retail.

On top of the pay issue was the travel compensation as well as day off pay. $15 on a day off? Unacceptable. But to fly the team representing your country to events in the living hell known as coach?

It’s no mystery this new deal was long overdue, but hopefully this is the stepping stone to increasing the pay for women international teams of different sports and maybe women in the workplace. Only time will tell.