The Arctic Circle and America’s relationship with Russia 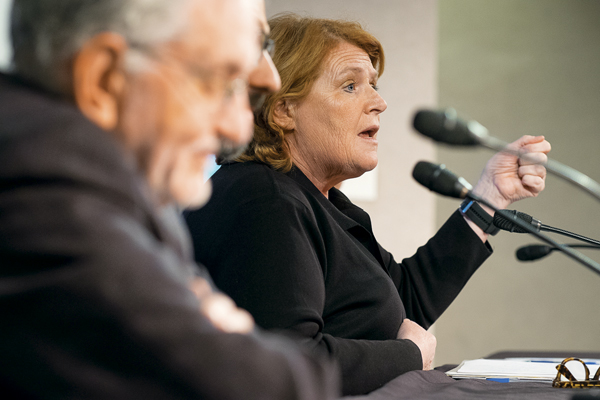 Relations between Russia and the United States may become even more confrontational in the next decade due to climate change in the Arctic, and UND could play a role in how they play out.

At the Kennan Conversation on Friday at UND, panelists spoke of the changing geopolitics between the two countries in regard to the Arctic Circle as well as the relationship as a whole.

U.S. Senator Heidi Heitkamp said it is difficult to compartmentalize the countries’ relationship, because there are innumerable factors that go into a single issue. She also defined how North Dakota is experiencing the confrontations firsthand.

“Russia is an existential threat to this country,” Heitkamp said. “We know that here because we’re on the front lines of protecting against that threat. We have to continue our dialogue and have to understand that if we push here, we may have a result that doesn’t achieve our purpose.”

The common theme amongst all four of the panelists was the necessity to maintain an open dialogue with Russia.

“The challenge is very clear, which is that the Russians have shifted from a posture of abandoning competition with the United States at the end of the Cold War to saying ‘we’re no longer going to tolerate the enlargement of an American sphere of influence near us,’” Kennan Institute Director Matthew Rojansky said. “Whether it’s in the Arctic or in Eurasia, they’re pushing back and they’re pushing back hard.”

He recommends that Americans understand who Russia is and where they’re coming from, engage them from a position of strength and live our values.

All of the panelists agreed that America should use sanctions against Russia when necessary, but that America should be careful with how they implement them. All sanctions have consequences on both ends of giving and receiving them. These sanctions impact the strength of the private sector, where Rojansky said American business with Russia has never been this low in 20 years.

“We need to figure out how to re-engage in smart ways that are compliant with sanctions that gives us leverage,” Rojansky said. “If we don’t have a place to stand, then we don’t have leverage.”

Much of the conversation focused on the changing landscape of the Arctic Circle and how that is and will impact foreign relations in the next 10 years.

The Arctic has been experiencing warmer temperatures leading to much of the Arctic ice melting away. This melting of ice has altered to the borders of northern countries and has opened new trade routes, which the panelists say will lead to further complications with the Russian government.

In relation to an over-arching topic of inaccurate information, panelist Kenneth Yalowitz cleared the air over the current handling of land-claims by Arctic countries. Yalowitz, a former U.S. Ambassador to the Republic of Belarus and Georgia, said there have been no unlawful land-grabs by any country nor has there been any violations of treaties over this issue.

“All member countries of the Arctic Council are all committed to continued cooperation, but they all assert that they’re going to defend their national interests,” Yalowitz said. “This is something we absolutely have to do in the Arctic.”

In order to do this, Yalowitz said he would like to see UND’s UAS capabilities and the local Air Force base pair with the University of the Arctic to assist in mapping the Arctic as it continues to change. Yalowitz said under five percent of the Arctic Ocean is mapped, and North Dakota’s resources could offer mapping technology and offer real-time weather conditions to assist shipping routes.

“You’ve got experience from this state that is applicable to the Arctic,” Yalowitz said.

The conversation continued to overlap the lives of students through understanding of current issues and the implications they have. Yalowitz said that young Americans must know how to read something and know whether it’s fact or fiction.

“This is a time of testing,” Yalowitz said. “The whole post-Cold War era now is owed to the ideas, and the assumptions are under challenge right now. The whole wave of democracies after the Cold War are beginning to be pushed back.”

Rojansky summed it all up through the larger issue facing America in its complicated relationship with Russia by explaining how the two countries see the world differently.

“At the end of the day, if we’re going to prevail against challenges presented to the United States by the Russians, it’s going to be because Russians are also convinced and persuaded, not by clever arguments, but by the evidence they see,” Rojansky said. “That the way Americans live, our rule of law, our institutions, our democracy, it works and it’s all problems they care about.”

Jacob Notermann is a staff writer for The Dakota Student. He can be reached at [email protected]