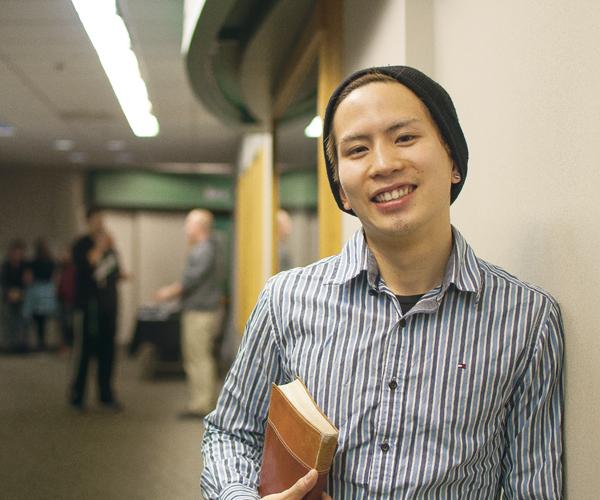 Tatsuya Koyama is a UND exchange student from Japan who has become recently interested in the Christian faith. Daniel Yun/ Dakota Student

“Anyone who belongs to Christ has become a new person. The old life is gone; a new life has begun.” -2 Corinthians 5:17

Tatsuya Koyama did not expect to learn this verse. In fact, he had never heard of it before coming to UND as an English Learning School (ELS) student from Japan last September.

Instead, he expected what most ELS students do: to learn English, make friends and explore America.

While meeting these expectations has been life changing for Koyama, they do not compare to how the unexpected has radically changed his life.

Koyama, 21, came to UND from Osaka, Japan for an eight month study abroad through Kindai University. From the start, Koyama looked forward to accomplishing his childhood dream of learning English and coming to the United States, but soon after arriving at UND, Koyama was hit with terrible news.

“I was in my homestay house,” Koyama said. “I got a message from my sister that our mother had a tumor. I called my sister and I asked her for some information about her and she told me that our mother was in the hospital.”

The news of his mother’s cancerous brain tumor came a week after arriving in Grand Forks. It made for an even tougher start to his time at UND, as he was already struggling with his English courses, making friends and transitioning to American culture.

Additionally, Koyama has a tight relationship with his mom, as he is the only one of three siblings who lives at home and his mom and dad are separated.

“I felt worry and anxiety,” Koyama said. “I was thinking that if my mother died, how would I stand or how would I live without her? I wanted to go back as soon as I could.”

In the midst of a tough first month, fellow Japanese exchange student and roommate Rui Okabe recommended that Koyama check out Freedom Church in downtown Grand Forks. Even though Koyama considered himself an atheist and grew up in a country with a Christian population around one percent, the recommendation caught his interest.

“Rui told me church was a good place to make friends in the U.S. I wanted to make friends with American people. At the time, that was the reason to go to church,” Koyama said.

Seeking a refuge from his struggles, Koyama went to the 11 a.m. church service on Oct. 2, along with Okabe and three other Japanese friends. Looking back, he admits the first outing at Freedom Church was a unique experience.

“Everyone sang songs, everyone lifted their hands, I felt strange, different from Japan,” Koyama said. “I have been to the Japanese church in Japan once and Japan

doesn’t have a music band, so I felt a difference. I felt strange, but I felt their power. I felt their faith.”

At that church service Koyama and his friends met Naoto Ashino, an aviation graduate who was flight instructing at UND. As a Christian from Japan, Ashino took Koyama under his wing right away, along with his friends.

“To my surprise, Tatsuya was the one who asked me about God, and I realized he was seeking God,” Ashino said. “I noticed there was no doubt in his heart and his face was shining with hope. I was hoping to share the gospel with him even before he asked me about God.”

Afterwards, Ashino met with the group of Japanese students two to four times a week to cook Japanese food, play Nintendo 64 and practice English, as well as read the Bible and pray for one another. As Ashino continued pouring into the group, Koyama saw something different about Ashino.

“He was not a typical Japanese person. At the time, I thought about how cool he was,” Koyama said. “Whatever we said to Naoto, Naoto accepted. He is very patient and I wondered how he was so patient. The difference between them (Christians) is patience and how they treat people.”

Additionally, Ashino introduced Koyama to UND Chi Alpha Campus Ministries, a student organization gathering at 7 p.m. on Thursday nights in room 1350 of the Reed Keller building. Through the ministry, Koyama got involved in a small group and was embraced by a welcoming community.

“When we meet people at Chi Alpha, they always smile. They talk to us a lot even if we are international students. They are awesome,” Koyama said. “I think the typical American is not willing to speak to international students, but people at Chi Alpha are willing to do that. Every time I go there, I feel warmth, belongingness, I connect with people very deeply and I feel they are genuine and authentic friends.”

The community at Chi Alpha and Freedom Church especially helped Koyama through his mother’s health situation.

“It helped a lot. While I was in Chi Alpha, church and small group, I felt like I didn’t have to think about my mother too much,” Koyama said. “The atmosphere at church and Chi Alpha made me not pay attention to the case of my mother. I felt when I was in church or anywhere involved with Chi Alpha or Christianity, she would probably be good. She would get healed and the tumor would be gone.”

The sense that his mother would be okay grew after a small group in the middle of October. After opening up about his mother’s condition with his group, Koyama remembers everyone circling up for prayer in Johnstone Hall’s third floor study lounge and his small group leader Judah Negron praying for his mom.

In Koyama’s view, the prayer did not just happen, it worked, as two weeks later, his mother underwent successful surgery to have her tumor removed, along with no sign of cancer.

“I was really happy. I felt relief. I had nothing to say. It was literally healing given from God,” Koyama said.

From there, Koyama and his friends continued going to small group on Monday nights and learned more about God and how to live as a Christian.

They also developed close relationships with Americans in their group, but especially their small group leader, Negron.

Nevertheless, after almost a month of going to Freedom Church, Chi Alpha and small group, Koyama still had questions about becoming a Christian.

“I was wondering if Jesus exists or not,” Koyama said. “When I spent time with Naoto, he told me a lot about it and he taught me that living with Jesus is good for our life and then that made me accelerate my feelings (for Jesus).”

All of those doubts went away during one service at Freedom Church on Oct. 23, Koyama remembers worshipping at the 11 a.m. service and dealing with the heartbreak of breaking up with his girlfriend back in Japan.

“I was singing a song and I was about to cry and then I felt like God touched my heart,” Koyama said. “I got healed and cured from him. Then, I talked about it with Judah and Naoto and then that night I went to Naoto’s house and I decided to be a follower. I wanted to be a believer.”

Ashino, along with his roommate Trevor Lachance, prayed over Koyama to accept Jesus into his life at their apartment that night.

While Koyama did not expect to become a Christian in America, it is the decision that has radically changed his life.

“He (God) has been changing me a lot. He’s a great, perfect father,” Koyama said. “Before that, I use to make fun of my friends. If my friends did something I didn’t

like, I would lose my temper quickly or ignore that person completely, but after I became a follower, I don’t do that. Now, I like serving my friends, complimenting my friends. It’s a total difference.”

As Koyama continues to grow in his newfound faith, he is in the midst of finishing his last month of the ELS program and graduates at the end of March before heading back to Osaka, Japan in April. While he is excited to be reunited with friends and family, he is also concerned about coming back as a Christian.

“The number of people that believe in Jesus is just one percent in Japan, so we are a minority. Japanese culture and tradition doesn’t like minority. They put priority on the majority,” Koyama said. “That’s kind of what I am afraid of when I go back to Japan. I may not be able to tell people that I am Christian. I may have a difficult time finding a church and connecting with a community like Chi Alpha.”

Even so, Koyama does not see anything changing his love for God.

“I go back to Japan with belief. Even when I go back, I will still be a Christian,” Koyama said. “As a Christian, we need to put that first, as the first carriage in the train, so if the train moves off the track, the top of the train doesn’t move, it’s very tight and steady. So if we put Christianity at the top of our life, we don’t get lost.”

As Koyama gets closer to heading home, there is one clear takeaway from his experience at UND.

With that, it is fair to say “an old life is gone and a new life has begun.”

Jake Andersen is a staff writer for the Dakota Student. He can be reached at [email protected]