Spring Ball kicks off at UND 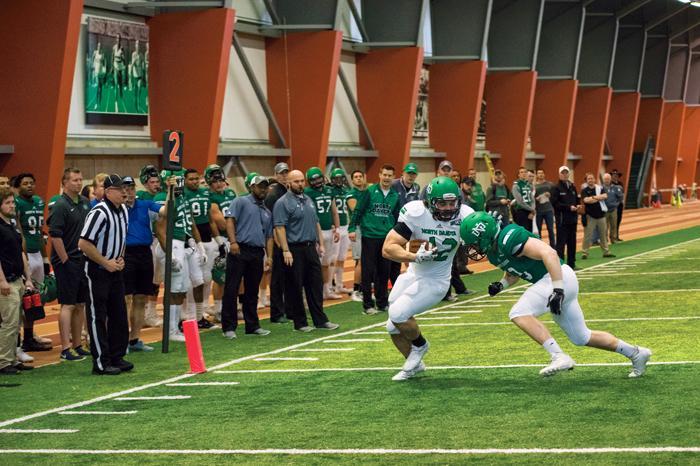 UND football team hit the practice field earlier this week to start spring ball. Getting in the first few practices before going on spring break.

Spring ball is a chance that gives players a chance to get in the reps they need to further develop their skills. The coaching staff staggered across the field looks on to evaluate.

The Hawks return to this season coming off of a 9-3 overall record with an undefeated conference record, 8-0.

“We want to get better,” Bubba Schweigert said. “We accomplished some great things last season, but we left the field for the final time with a real bad taste in our mouths.”

That bad taste was a game winning field goal from Richmond that brought the Hawks playoff run to a landing.

Although UND made it to the first round of the playoffs, Cole Reyes has more specific goals in mind for the upcoming season.

“We are ready to take the next step,” Reyes said. “Our goal was to win a big sky championship, our ultimate goal is to go to a FCS championship. We got to the playoffs, but we are not satisfied with that. We want to get a first round win and then continue on.”

Spring ball will be the start of improving the team and getting the Hawks set up for success. The first few practices brought a lot of high energy into the High Performance Center, where all practices are open to the public.

“If we can practice with that type of energy we are going to get better as a football team,” Schweigert said.

Although there were mistakes made, they can be worked out in time of the season.

The key during spring ball is to work on the fundamentals and communication on both side of the ball.

“We don’t want to lose our focus on fundamentals,” Schweigert said.

These practices also give valuable reps to those who ended last season early because of injuries. Luke Stanley, wide receiver, was injured last season and is excited for the upcoming season.

“I’m excited, everyone is excited, and there is a good amount of energy in the team right now,” Stanley said. “Just to be almost fully healthy feels really great. I feel like I am getting back into where I was at the end of the season. It feels good.”

Spring ball is also a chance for those players that made positional changes to get reps in their new roles.

Although it can be tough to make a change in a position, many of these athletes have played many other positions throughout their football careers.

Some transitions are easier than others. Jake Disterhaupt is switching from outside to the inside linebacker.

“There’s a few different things, but the coverage drops are similar. I’ll just have to read different offensive lineman and know where I fit in the run game,” Disterhaupt said.

Another interesting move was Logan Alm from Defensive Line to the tight end spot. With good size and athletic ability, there could be potential for a good offensive player. There will have to be an abundance of reps for these players in order to be ready at the beginning of the season.

There will be practices leading up to the annual game April 14. Plenty of time for practice before the first game of the season, April 31, 2017 against Utah.