Farewell to another Legacy 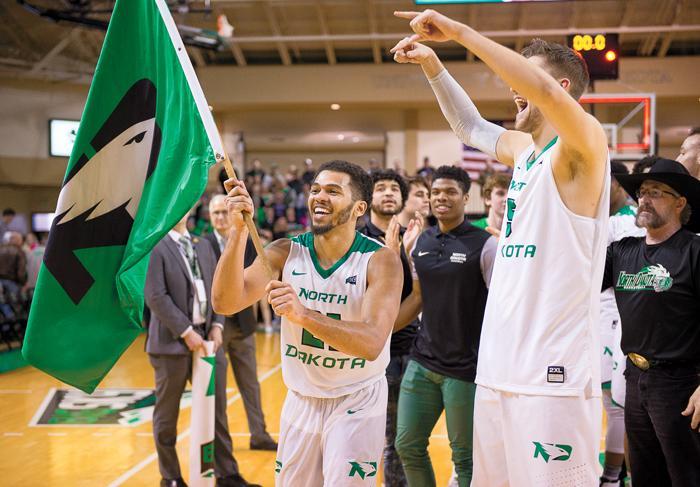 UND senior guard Quinton Hooker could not control the large grin on his face as he walked off the court for the last time at Betty Engelstad Arena. Leading the team with 29 points, Hooker and the UND men’s basketball team capped off the final game of the regular season with an 82-73 win over Portland State last Saturday night.

The victory gave the Fighting Hawks a Big Sky regular season title, as well as the no. 1 seed in the conference tournament in Reno, Nev. The Hawks’ 19-9 regular season record (14-4 Big Sky) is the best in UND’s Division I history.

“It’s something special. It’s unbelievable, really,” Hooker said. “It’s everything that being a basketball player you dream of as a young kid and to be able to do that here at the University of North Dakota. I’m truly just so thankful.”

The regular season title was UND’s first in the Big Sky Conference and for Hooker, it was a long time coming.

“All the glory goes to God,” Hooker said. “We could not have done this without Him. Truly, this has been four years in the works. seeing my freshmen year, getting to that championship and how close we were to getting a regular season championship then. There’s still a lot of work to be done. We are going to enjoy this moment for today and just be blessed to be in this position.”

While Hooker has his sights on a Big Sky tournament championship, he has arguably established himself as the top player of UND’s Division I era already.

Throughout his career, Hooker is a three-time captain, three-time UND leading scorer, two-time First Team All-Big Sky honoree, and a Lou Henson Mid-Major All American. In addition, he became the first player to average more than 20.0 points per game in UND Division I history last season (20.1).

While Hooker is bound to pass Jackson on the all-time scoring list, both have made comparable legacies in their respective eras at UND, especially in their senior seasons.

Going back to Jackson’s senior season in 1966-67, the forward led his squad to a North Central Conference title, which was UND’s third straight. Even more impressive was his UND-record 27.4 points per game and 14.4 rebounds per game that carried the team all season long to a 20-6 record, including 11-1 in the NCC.

Yet, Jackson’s team started their season off unexpectedly, as they opened up the year 3-4. Like Jackson’s squad, Hooker and the Hawks started the year in similar fashion, having a record as low as 5-6. Each start to the season was surprising considering the success of their previous teams, as well as the return of the senior stars.

But, as great leaders do, captains Jackson and Hooker got their teams back on track.

After starting 3-4, Jackson led his team to a 17-2 record the rest of the way, including a 10-game win streak following the rough start. At season’s end, Jackson had 12 30-point games and two 50-point games, many of those coming in the 19-game stretch. In addition to his UND-record in points per game, his 14.4 rebounds per game were just .2 behind the UND-record of 14.6 set by Don Augustin in 1956.

As for Hooker, he catapulted his team to success following a 5-6 start, beginning with an overtime win over Sacramento State. In that game, Hooker scored 31 points and would go on to lead UND in scoring each of the next three games, all wins, with point totals of 20, 23 and 24, respectively. The four game win streak got the Hawks to 9-6 and from there, they would go on to win 10 of their next 13, finishing out as conference champions.

Hooker finishes the regular season with 14 20-point games, including three 30-point games, leading his team scoring in half of their 28 total games.

While Jackson’s senior season ended with a loss in the NCAA Division II Midwest Regional, he stands on top of many statistical categories in UND history. He is sixth in points (1,708) and third in rebounding (1,109), along with posting a school-record 12.9 rebounds per game over his career. With that, he carries three All-American honors, as well as two NCC Most Valuable Player awards. In 1981, he was inducted into the UND Hall of Fame.

Taking into account the players’ senior seasons, as well as their career success, it begs this question: Who leaves the larger legacy at UND?

At the moment, Jackson’s legacy is at the top of the list, considering his many records, as well as being a part of three straight 20 win seasons ending in conference titles. In addition, if Jackson had played his freshman year at UND, he realistically could hold the UND all-time record in points and rebounds, proving just how great his numbers are.

That being said, Hooker’s play in this season’s turnaround has him in the discussion for Mid-Major Player of the Year and gives UND a great opportunity to win the Big Sky Conference tournament in order to get to the NCAA Division I tournament. The feat of leading his team to the national tournament would add another item to Hooker’s resume and be something that has never been done before in UND men’s basketball.

Additionally, Hooker was pressed into the leadership role as earlier as his sophomore year and throughout his three years as captain, has brought his team from eight wins and tenth in the Big Sky to 19 wins and first in the Big Sky, a feat no one would have expected three years ago.

While Jackson’s legacy will always be remembered, Hooker’s impressive statistics and success leading his team in Division I play cements his legacy over Jackson, pending his ability to lead his team to new heights with a berth in the NCAA Division I tournament.

Nevertheless, Jackson and Hooker go down as perhaps the greatest UND basketball players in their respective eras and UND men’s basketball has forever been changed by their success.

In the meantime, let’s just hope that Hooker’s legacy continues to be written with postseason heroics leading to UND’s first Division I national tournament appearance.