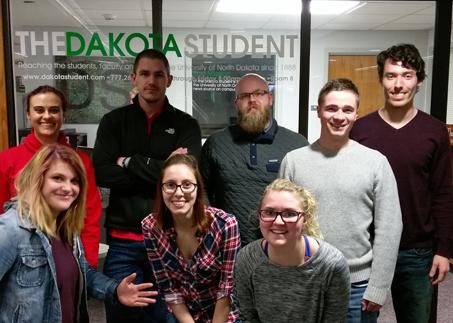 Recently, I wrote an opinion piece expressing my distrust and lack of confidence in Dave Owen, a candidate for VP of Student Government and a staff writer for the Dakota Student. Mr. Owen disagreed with my article and published his retort on his Facebook page.

As I do not wish to give Mr. Owen more attention than I find necessary, I will not be addressing his counterarguments to my article. However, I will be addressing an issue I had hoped to keep private, as it was not my wish to make this information public.

As mentioned in my previous article, Mr. Owen exhibited “a pattern of disrespectful behavior that I have not witnessed in all my 29 years.” I did not wish to elaborate on this further, as I published my original article to ensure Mr. Owen would not obtain a position with Student Government, not to ruin his reputation.

However, since Mr. Owen insists on continuing this charade, I have gathered examples from written and signed testimonies from Fall 2016 that were completed last semester just before his “voluntary demotion” from opinion editor to staff writer at the Dakota Student.

I will let these testimonies, which have been copy and pasted directly from the documents that were submitted, do the talking.

Nick Nelson, photo editor for the Dakota Student: “David Owen has consistently displayed a blatant disregard and disrespect for others to the extent that, when confronted by other staff members with issues caused by his actions, he either continues his behavior in a more aggressive and/or repetitive manner or he shouts over the other person until they stop speaking to him. He particularly delights in the latter behavior and suggests it to other staff members in the Dakota Student office because (in his words) “If you keep bothering them, they’ll eventually give in.” David’s conduct would be unacceptable in any professional setting, but is especially egregious in a collegiate environment with clearly defined expectations of conduct for all students, faculty and other employees.”

Matt Eidson, news editor for the Dakota Student: “During the Fall 2016 semester, Dave Owen, the opinion editor for The Dakota Student, exhibited a pattern of disrespectful behavior toward the editorial staff of The Dakota Student. His actions, which commonly included sexist comments, routinely disrupted the workplace environment during production days (Wednesday and Sunday). Dave has proven time and time again that he is unwilling to exercise any semblance of tact or respect in the workplace. His actions, cited below, have led to a decrease in workplace moral. While the editors within the newsroom tried to reason with Dave and maintain proper workplace etiquette, the attempts ultimately proved ineffective.”

Brendan McCabe, copy editor for the Dakota Student: “Dave’s sexist behavior is not limited to the editors. On her first day, an opinion writer explained to him she was not comfortable being called by her last name, and strongly preferred being called by her first. After this exchange, Dave would only refer to her by her last name. Multiple times Dave was told by one of our female editors the writer did not want to be called her last name, but he did not cease the behavior until I, a male, sternly told him it must stop. The gender of Dave’s confronter should not be a factor in who he listens to, but it has proved to affect his actions.”

Emily Gibbens, opinion editor for the Dakota Student: “The way Dave speaks to the women in the newsroom is very different than the way he speaks to the guys… Dave makes out of line comments often and he laughs at inappropriate times. He has made rude comments about people who were killed by drunk drivers and people who battled or died of cancer. He also continued to laugh in my face about my friend who was in a fire accident telling me I was wrong about the story, even though I was there.”

Allyson Bento, sports editor for the Dakota Student: “During a Wednesday production, I was putting together a story about a female athlete who had been in a near fatal accident, this included the help of photo editor Nick Nelson and graphic designer Vitoria Faccin. During the first round of edits Mr. Owen referred to appearance of the athlete as “derpy”, as offensive as this statement was everyone in the office requested he not refer to someone’s physical appearance in a demeaning manner. Again, with the behavioral pattern that Mr. Owen has presented this fueled him to laugh hysterically and continue to refer to said athlete as “derpy”. This is extremely offensive not only to the athlete in question but also to the team of us that worked hard to put together the package for the production.”

Nick Nelson, photo editor for the Dakota Student: “I have worked at the Dakota Student off and on for five years, with the last two as the photo editor. While I have disagreed with the opinions and sometimes the actions of my coworkers at the Dakota Student over the years, I could always find a position of mutual respect with them and maintain a courteous, professional work environment. This is not the case with David Owen. I have yet to meet someone who takes such wanton pleasure in treating others so poorly, most of whom are women. His behavior towards those of us unfortunate to be in contact with him has given me pause as to whether I want to continue my employment at the Dakota Student. I find myself using headphones to disconnect from the hostile environment he creates in the Dakota Student office during production, which impacts my collaboration with other editors.”

Matt Eidson, news editor for the Dakota Student: “…I informed Dave that our discussion did not include him, he began raising his voice and asserting his opinion with rude comments that were sexist in nature. To paraphrase Dave, he asserted that women “couldn’t hack it” in major league sports, and that women were “physically inferior to men.” As stated before, Dave is obviously entitled to his opinion, yet, his insistence to state his views without regard to the thoughts and impressions of the females in the office demonstrate a lack of tact in the workplace, which could lead to hostility in the form of verbal demonstrations and a decrease in moral.”

The above statements are excerpts from testimonies that were submitted during the fall 2016 semester. The editors, quoted above, gave their permission for their comments to be used and published in this article.

As depicted by the comments above, Mr. Owen repeatedly made disrespectful and sexist comments during production days at the Dakota Student. This continued behavior made publication nearly unbearable, and almost encouraged many editors, myself included, to not return the following semester.

These testimonies were not doctored in any way, shape or form; the individuals cited above wrote them during the fall 2016 semester. Copies of these testimonies have been printed, signed and placed in the possession of Autumn Graber, the sales, marketing and office coordinator for the Dakota Student.

Mr. Owen is entitled to his opinion, and is allowed to misconstrue and manipulate facts as much as he would like. He is also allowed to call us, the Dakota Student, “fake news” and berate us online by posting his thoughts via Facebook.

Though pointing out perceived inconsistencies to his followers without providing the article he is referring to is laughable, at best. But in the case of his disrespectful and sexist behavior, the evidence, as cited above, is clear.

As with my last opinion piece, I’ve no doubt that Mr. Owen will have a retort. I’m sure he will publish a long Facebook post in which he will address portions of this piece without sharing it to provide context.

But, I can’t say I blame him. Sharing this article next to his words wouldn’t bode well for his political image. Again, laughable at best.

It’s no wonder that an opinion piece, meant to serve as a public retort to the piece I previously wrote, was written by a writer that he openly admits has never met him before. Because the overwhelming majority of the Dakota Student staff that has met him before is, to put it nicely, less than willing to defend his character.

Matt Eidson is the news editor for the Dakota Student. He can be reached at  [email protected]