The bright lights of Reno 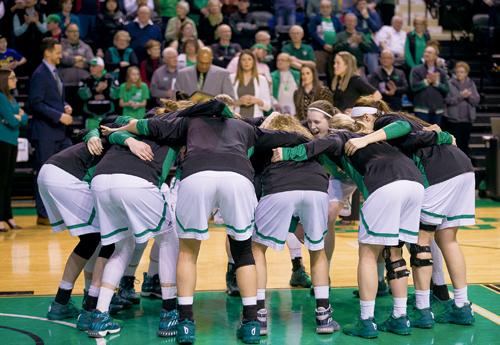 Because of the Fighting Hawks’ success during the regular season, they go into the playoffs as the No. 2 seed with a first round bye. With an overall regular season record of 20-9, this is North Dakota’s most successful season since 2013 – 2014 when they went 22-10 and proceeded to win the Big Sky Conference Championship.

This year, UND’s first playoff match is  Wednesday, March 8 at 5:35 p.m. (7:35 p.m. CST) at the Reno Events Center. Their opponent will be decided on Monday, March 6, when No. 7 seed Portland State takes on No. 10 seed Northern Arizona in game three of the first playoff round.

While the Women’s basketball team accomplished winning records both last year and the year before, this year’s season has been strikingly similar to their triumphant 2013 – 2014 season.

In the spring of 2014, UND finished tied with Southern Utah with the best regular season conference record. They went on to beat Montana in the final round of the Big Sky playoffs to become conference champions.

This season, under the same head coach, Travis Brewster, the Fighting Hawks are once again tied for first with the best regular season conference record. Currently, there are three remaining players on the team who were also on the 2013 – 2014 Big Sky Championship team.

Entering playoffs, these upperclassmen find themselves in a similar situation as when they were freshmen, only this time they’re the ones leading the younger girls to a hopeful championship win.

One of the remaining 2013-2014 freshman, senior forward Samantha Roscoe, stated that, “I didn’t play [in 2014] that much, but seeing the older girls and how they went through all the wins and then going into the Reno championship, I really try to learn from what they did.”

Heading to Reno for playoffs this year will be part of a two week long road trip for the team.

“The main thing will be keeping the focus throughout the whole two weeks,” Roscoe said.

As a result of UND’s 2013 – 2014 Big Sky Conference championship run, they secured a position in the NCAA tournament. Although they lost to Texas A & M in the first round, the team achieved a level of success that few predicted early on in the year, and it proved to be a fantastic year for second year head coach Travis Brewster

Given this year’s situation, the UND Women’s basketball team looks ready to repeat their resilient 2014 effort and take home another Conference Championship. With that in mind, however, history has shown that anything can happen during playoffs. Last year for instance, the championship game featured the No. 3 seed Idaho vs. the No. 9 seed Idaho State.

Even if the Fighting Hawks win this year’s conference championship, it remains unlikely for them to go far in the NCAA playoffs due to the sheer talent found throughout the nation.

But still, getting there is the main priority for UND. For them, the Big Sky is no longer the limit; this year the Fighting Hawks endeavor for an NCAA showing.