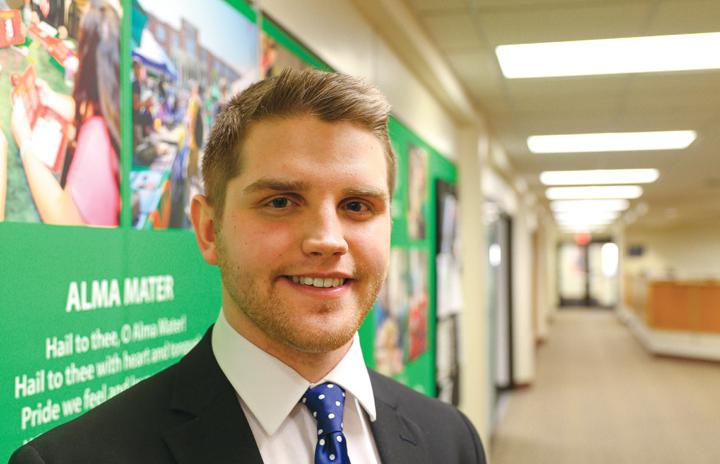 John Bjorkland is one of the candidates running for UND student body president this April.

In preparation for student elections on April 12, the Dakota Student is sitting down with candidates for Student Body President to talk about their backgrounds, motivations and platforms. Featured in this issue: John Bjorklund.

He criticizes the current administration for failing to alert students to public meeting times or sending out regular e-mail updates. These are practices that Bjorklund says used to happen, but have fallen by the wayside in recent years.

The SFAC, which stands for Student Fee Advisory Committee, reports to the President and advises on the distribution of mandatory student fees not connected to a particular course or program. Bjorklund is particularly concerned by the fact that there are more faculty members than students on this committee, and feels that “students should have a voice in student fees.”

As President, Bjorklund says that his main duty is to be the “voice of the students,” particularly in handling the student fee budget. One of his goals is to make sure student organizations are receiving adequate funding. “$150,000 allocated for student organizations is not sufficient,” says Bjorklund, referring to the current budget, “That equals out to $10 per student.”

Like many UND students, Bjorklund is concerned by the university’s current budget concerns; he believes the main problem lies in the structuring of university’s administration and staff.

“There are 3 percent more students at UND than at NDSU, but we have 33 percent more middle management and faculty” Bjorklund said, citing statistics from the Grand Forks Herald that he says are currently “unchallenged.”

As a squad leader in the Minnesota Army National Guard, Bjorklund says his most important duty was to “teach and show new recruits the ropes.” He believes that this experience has prepared him for leadership at UND.