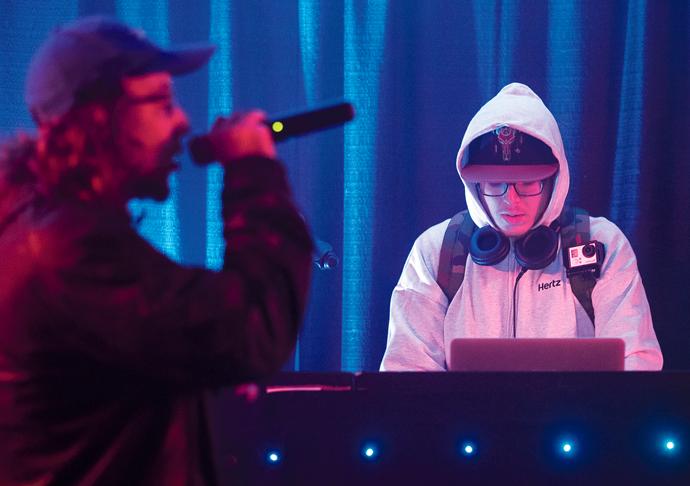 New Reign (back) creates beats as rapper Jantzonia (front) freestyles this past Saturday at the University Park warming house during the second Koselig event.

Koselig is a local organization with the goal of trying to get people in the Grand Forks community to be more active during the winter season. Therefore,  Koselig has been working to plan more events people can attend in the winter, specifically hosted at the University Park warming house. Koselig has a Facebook page and creates fliers to promote these events.

Unfortunately, there were only a couple of other people at this performance, including myself. The advertisements stated the performance started at 7 p.m. so naturally my friend and I arrived about 10 minutes late, but when we got there it still had not started yet.

The event planner, Marcus Wax, informed us he was expecting everything to start around 8 p.m., even though he advertised the event to begin at 7 p.m. That was a little awkward and disappointing since the crowd was so small, but arriving around 7 p.m. also allowed me to talk to some people there and see the artists warm up.

Wax and the members of Zen People were extremely nice and friendly. The guys just wanted us to feel comfortable, enjoy ourselves and have a good time. They also offered an assortment of beverages and snacks for their guests, which I thought was so thoughtful of them.

Zen People was founded in 2012, when a couple friends decided they loved music enough to make a life of it together. Their goal is to build a movement, beginning with music. They want to create music people can relate to and call their own, since they are all from such an unclaimed area.

They have had the opportunity to play in many different locations across the country and have accumulated a pretty good amount of fans over the past five years. Zen People has also networked with bigger artists such as Prof. Metasota and Finding Novyon.

With a talented group on the rise like Zen People, it would have been better for them to preform at a bar like Level 10, where people are already going to be there, and they have similar music tastes.

For someone who loves rap and hip hop music, I have to say, I was definitely entertained by Zen People. They all have a unique style as individual artists, but they also come together nicely as a group, complementing each other’s styles. I think I was the most impressed with Cold Sweat. He sounded his best vocally, and I was feeling his passion in his songs the most.

Zen People as a group and the artists as individuals all have their own Facebook pages, Twitter and Soundcloud profiles if you are interested in checking out these local hip hop stars.

Jordan Hermes is a staff writer for The Dakota Student. She can be reached at [email protected]