One month of Trump- is the “honeymoon” over yet 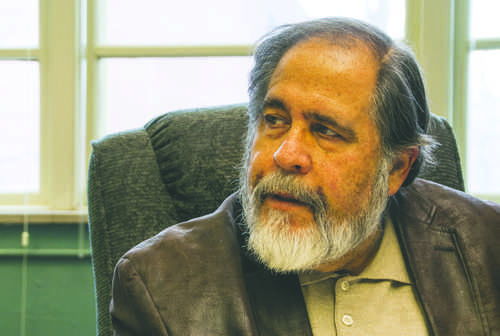 Albert Berger is a professor in the History department and author of "The Magic That Works: John W. Campbell and the American Response to Technology.' Daniel Yun/ Dakota Student

Donald J. Trump was sworn in as the 45th President of the United States on Jan. 20, 2017. In the month since his inauguration, part of the “honeymoon” phase of a new president, he has generated considerable attention from the rest of the world, a significant portion of which is not in his favor.

In fact, since before day one of his administration, millions in the United States had proclaimed him “not my president,” and although unfavorable views of political figures are nothing new, the amount of criticism is a first.

“As a historian,” said Albert I. Berger of the University of North Dakota, “ I cannot recall any occasion where people were talking about the impeachment of a president in the first 30 days of his administration.”

The “honeymoon” period of the presidency is generally referred to as the first 100 days in office. During this time, presidents usually have the most favorable opinions. Trump currently has a 38 percent approval rating.

Berger, a history professor specializing in the 20th century, U.S. military and U.S. foreign relations, has gained significant experience in politics in his years. Before coming to UND, Dr. Berger briefly ran a public affairs office in New York City, where he grew up, and most of his clients were campaign programs, including the Goldwater campaign of 1964.

Berger was a supporter of Senator Bernie Sanders in the 2016 elections; he had been a registered Republican until the mid-1970s, when he became a Democrat, joining the anti-war movement. In terms of the new administration, Dr. Berger offered an expansion on the quote by writer Henry Adams.

“To study history from General Washington to General Grant is to show disproof of Darwin. To go from Dwight Eisenhower to Donald Trump… my my my.”

Berger reflected on the transitioning shape of the Republican party as well, from when Abraham Lincoln and then-president of Mexico Benito Juarez had close ties during the 1860s, to the dislike of turn of the century Republicans being disliked due to their support of non-white Americans (the primary change came from the efforts of Lyndon B. Johnson in forward civil rights in the 1960s, and all the previously Democrat southern states became Republican).

When looking at Trump, Berger made light of certain firsts the new president has achieved, but perhaps not in ways Mr. Trump would appreciate. Aside from the talks of impeachment, Berger noted the attitude surrounding his supporters, and the depth of his business influence compared to previous presidencies.

Another first for Trump, according to recent news, is that he will be the first president since Ronald Reagan to skip the White House Correspondents Dinner (Reagan was recovering from his assassination attempt at the time).

President Trump has also gathered controversy elsewhere, including worldwide condemnation of his Executive Order 13769, which temporarily bars entry from Iran, Iraq, Syria, Libya, Somalia and Sudan, as well as all refugees.

Trump has also called news organizations like CNN and the New York Times “the enemy of the American people” and banned these networks, as well as the LA Times and BBC, from engaging in a recent White House press briefing.

Other executive orders by Trump include starting construction on his border wall with Mexico, and forwarding previously-halted construction on the Dakota Access Pipeline.

Only time will tell what becomes of the Trump administration, but Berger had some insight for students watching the unfolding administration:

“As with any politician, what they say doesn’t matter, or matters very little… what they do is another matter. So you always watch what [they] do, rather than what they say,” he said.

“Activism is better than non-activism.Freedom is a promise that one generation makes… to the generations to come later, ‘we’ll have it there for you’. And that’s a promise incumbent upon every citizen to keep.”

Berger’s office is located on the 2nd floor of O’Kelly Hall, and his hours include Friday from 2-3pm. He can also be reached via email at [email protected]