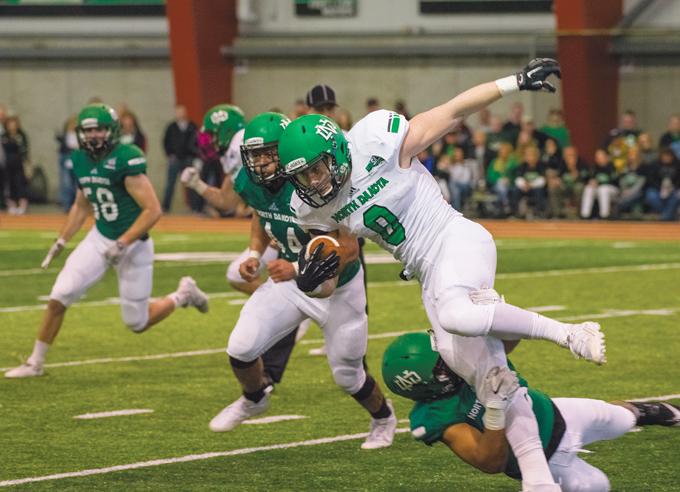 Cole Reyes (center) runs the ball during a green and white scrimmage last spring at the High Performance Center.

The UND Football team made great off-season moves picking up 25 new recruits for the future of the football program.

Head Coach Bubba Schweigert and the rest of the coaching staff believe they have found some future stars that can develop to their full potential.

“They really have to believe this place is special and they want to do great things for the University of North Dakota,” coach Schweigert said regarding the new recruit class.

Multiple players have received opportunities to play else where, but really believe that UND is the right choice to develop their skills which says a lot about the program.

A number of recruits come from the neighboring state Minnesota. “I think we have a really good reputation in Minnesota,” Schweigert said.

It is important to recruit those in the five-hour radius and establish relationships that help make it easier to sign players that could easily play somewhere else. Although there is a decrease of North Dakota athletes, several North Dakota players have also been recruited to this years class.

It may seem that the switch to the Missouri Valley Conference made it harder to recruit players with the uncertainty, however, Schweigert claims it did not change anything on the recruiting side of things.

The hawks want to remain fast and physical on defense while they play bigger competition.

Regarding the offensive side of the ball Schweigert said, “We have to become more physical then we were a year ago and two years ago because we are not were we want to be yet.”

Students are excited for the Colorado trio, Hayden Blubaugh, Tyler Shannon and Mikey Griebel that will join the team.

Blubaugh, defensive back, racked up 2,386 rushing yards and 28 touchdowns his junior year and 1,911 yards his senior year winning a number of honors along the way. He displayed his physical and athletic ability on both sides of the ball in his high school years.

Shannon, another DB, put up average stats in his past high school seasons, but shined on the track team. He earned the Jeffco Conference MVP in the 110-meter hurdles as a junior.

“He has those long levers that we look for in our safety,” Schweigert said.

I think these two in the backfield will add a great presence on defense and help control the opponents passing game in the future when fully developed. Both with great size, over six feet, are what you are looking for to shutdown bigger receivers.

Mikey Griebel, WR, is on the smaller side at 5’9” and 180 pounds. Griebel is one of the two wide receivers that committed. He makes up for his height with his deceptiveness and toughness. His role could help open up a different style of offense. The two-way player in high school rushed for a total of 3,700 yards and 789 reception yards.

“We think Brock’s style of play really fits the type of offense we run here at UND,” said Schweigert.

Boltmann played baseball and hockey on top of football throughout high school.

He threw for more than 3,000 passing yards with 32 total touchdowns. Receiving a number of honors and being selected to play in the Minnesota football showcase all-star game at U.S. Bank where he was named the defensive MVP.

His leadership and competiveness was displayed on all the teams he played for while at Edina. This attracted many teams including UND that successfully managed to get him signed.

Over 75 percent of the committed players made an appearance in the summer football camp at UND. This helped the players develop and gave the coaching staff a chance to get a good look at all the players.

One of the players that stood out to me is Jeremy Jenkins from South Elgin, Ill. The offensive line player stands at 6’6” and weighs in at 280 pounds. With Jenkins’ size and strength, he creates opportunities for big holes by making key blocks down the field.

The defensive front also got an improvement with the explosive lineman, Nick Honerlaw, and the preferred walk-on linebacker, Hyden Reynolds, from West Fargo.

The 2017 UND football class as a whole shows great potential for development eagerly looking to continue the growth of the UND football program.