A tale of two teams 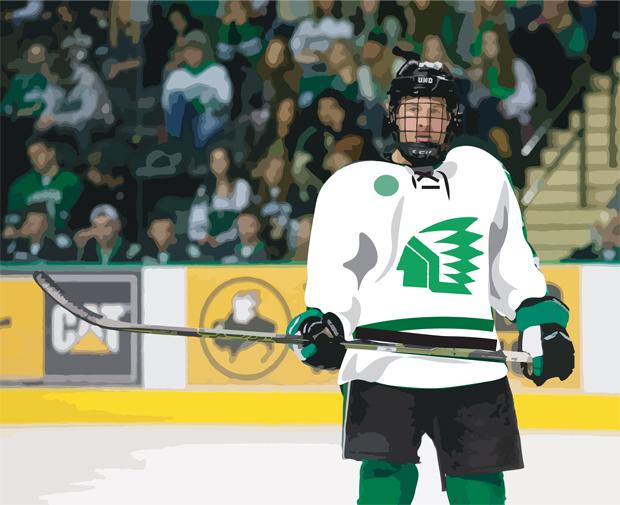 It’s no mystery the UND Fighting Hawks men’s hockey team is in the midst of a season of adversity. After being swept by Western Michigan last weekend, the Hawks have lost seven out of their last 10 games and sit fifth in the NCHC standings with a 15-13-3 record, including 8-11-1-1 in the conference.

With four games left before the NCHC playoff, the Hawks look nothing like last year’s championship team and are fighting just to get into the NCAA tournament. This is a stark difference from last season when UND’s tournament chances were almost a certainty, considering their 23-5-3 record and share of first place in the NCHC. The underwhelming play is a shock to many who had high expectations following UND’s eighth championship title. Yet, should it be?

Recent history would suggest not. Out of the prior 11 national champions, only five made it back to the NCAA tournament the next season and none of those teams made it to the NCAA Frozen Four. Furthermore, only one of the last eight defending champions have won a game in the NCAA tournament, proving that repeated success is no easy feat.

With this in mind, let’s look to the last time UND was in this situation. This goes back to the 2000-2001 team who sought a repeat after delivering the university’s seventh national championship in 2000. Yet, unlike recent defending champions, the team was successful as they ended up heading to another national championship, although in a losing effort.

This brings to question how the current team compares to its predecessor, as well as what they can take from them down the stretch, and most importantly, will they reach the same level of success?

After winning the championship in 2000, UND lost four key players. On the offensive end, forwards Lee Goren and Jason Ulmer, who were second (63) and third (56) in points, respectively, were lost due to graduation, as well as captain Peter Armbrust.

In addition, the 2000-01 team lost a physical presence on the defensive end in Mike Commodore, as he would sign a professional contract with the New Jersey Devils. At the time, they were seen as huge losses with head coach Dean Blais suggesting a rebuilding year for UND.

On the other hand, UND’s current team lost nine championship contributors from last season. The loss of forwards Drake Caggiula and Nick Schmaltz were particularly tough, as they were second (51) and third (46) in points last season just as Goren and Ulmer were in 1999-00. On defense, UND lost key contributors to the NHL in Troy Stecher, Paul LaDue and Keaton Thompson, forcing UND’s underclassmen to step up on defense.

While both teams lost key players, including two of their top three scorers from the previous championship seasons, UND’s current team lost more on the defensive end between the losses of Stecher, LaDue and Thompson. Stecher was the top defensive scorer (8-21-29) last season, while LaDue was arguably the best defensive defensemen, as he led UND defensemen in +/- (+31).  The losses have contributed to UND’s challenging season, especially on the defensive end, whereas the 2000-01 team returned their top scoring defenseman, along with a majority of their defensive unit outside of Commodore.

In 2000-01, Dean Blais was coming into his seventh season as UND’s head coach. Along with winning the national championship in 1999-00, Blais led the 1996-97 team to a title, giving him two national championships in six years at UND. Blais boasted a 161-68-14 record heading into the 2000-01 season and revitalized a program that experienced three straight losing seasons prior to his takeover in 1994.

Currently, Brad Berry is the head coach at UND after taking over for Dave Hakstol last season.  Berry became the first collegiate hockey coach to win a national championship in his first season. Today, Berry’s record sits at 49-19-7 and he will look to build that record in the right direction with the final games of the year approaching.

In his first year, Berry deserves much credit for leading UND to its first national title since 2000. Yet, Blais’ track record of success, including two national championships heading into the 2000-01 season, speaks for itself.

The 2000-01 forward unit was led by top-scorer Jeff Panzer (26-55-81), who also led UND in scoring (19-46-65) during their championship year. In addition to Panzer, returning forwards Bryan Lundbohm and Ryan Bayda helped replace the point production of Goren and Ulmer by scoring 69 and 59 points, respectively. Statistically, UND scored almost 4 goals per game, while posting a near 20 percent success rate on the power play.

This season, UND is being led by sophomore Shane Gersich, who has 19 goals and 15 assists for a total of 34 points. Although there are still games left in the season, the point production likely will not reach the production of last season’s leading scorer Brock Boeser (27-33-60). This is partially due to missed games by Boeser and freshman star Tyson Jost. Yet, even with Boeser missing six games and Jost missing seven, they are second (26) and third (25) in points, respectively, and both average over a point a game. For the season, UND averages 3.1 goals a game, while scoring on 18.9 percent of power plays.

While the 2000-01 UND team will likely have better offensive statistics, both teams took a dip in their goals per game and power play percentage from their previous seasons. In addition, both teams lost two of their three top scorers from the year before putting them in similar situations. Luckily, UND has a history of reloading with freshmen talent, as well as developing returning players in a positive direction. The offensive talent was unquestionably elite in 2000-01, as it is with the present UND hockey team, even with the dip in numbers for both teams.

Defensively, UND returned seven defensemen in 2000-01, including Travis Roche, who led defensemen in points with 49, as he did their championship season (26). Even so, the team allowed more goals per game at 2.68 compared to 2.20 the year before. On the other hand, the returning defensemen contributed greatly in improving their penalty kill from 82 percent to 85.4 percent.

For the current UND team, the difference has been greater, as they have allowed 2.5 goals a game compared to 1.8 last season. Their penalty kill percentage has also dropped from 86.2 percent to 84.3 percent. The losses of Stecher, LaDue and Thompson have clearly impacted UND’s defense, as it has forced the likes of underclassmen Christian Wolanin, Colton Poolman and Hayden Shaw to fill their shoes.

The 2000-01 possessed a more experienced group of defensemen that helped lead UND to another championship game, whereas the current UND defensive unit is made up of less experienced players. While there is still time for defensive improvement for UND this season, it is clear that the lack of experience on defense has played a roll in an up and down year.

UND returned both their goaltenders from their 2000 championship run in Karl Goehring and Andy Kollar. The combination was considered the strength of the club in 2000-01, yet top goalie Goehring experienced a drop in numbers. After posting a 1.90 goals against average in 1999-00, Goehring responded with a 2.38 average in 2000-01. In addition, his save percentage dropped from .927 to .917. That being said, backup Kollar stayed steady posting almost identical statistics from the previous year except playing in four more games in 2000-01 (19).

Like the 2000-01 team, the 2016-17 Hawks welcomed back their top two goalies Cam Johnson and Matt Hrynkiw. After a season that saw Johnson post outstanding numbers in goals against average (1.66) and save percentage (.935), Johnson has not experienced the same success, as he currently has a 2.31 goals against average with a .907 save percentage. A combination of inexperienced defensemen and a heavy workload may be part of the reason for the dip in numbers, but nevertheless, is a problem to be fixed down the stretch.

Johnson leads the charge for UND again this season, but like Goehring in 2000-01, has experienced a drop in numbers. Although Johnson’s numbers last season beat Goehring’s numbers in 1999-00, what evens this area out is the fact that Kollar became a reliable backup for the 2000-01 UND squad, as he would start 19 games. For the present UND team, Johnson has manned the crease a majority of the season with backup Hrynkiw getting only four starts. In a league where having two quality goaltenders is crucial for success, Hrynkiw’s lack of play could present problems if asked to play in important games to come.

As the Fighting Hawks look to salvage their season in pursuit of another national championship, they can look to their 2000-01 predecessor for inspiration.

First and foremost, like the 2000-01 UND hockey team, the Hawks can take pride in knowing that they have the coach, as well as the talent, to win another national championship this season.

At the same time, the Hawks have areas to improve on, particularly on the defensive end. While they may not boast the defensive experience of the 2000-01 team, the younger defensemen have two upperclassmen to look up to in captains Tucker Poolman and Gage Ausmus. Additionally, they have the benefit of playing in front of Cam Johnson who has proven to be an elite goalie, especially when given the proper defensive help. If the young defensemen can learn from the past and tighten up defensively, there is no doubt UND can look like last’s year championship team.

Finally, keeping star players healthy will play a big factor. As mentioned, key players Boeser and Jost have missed time this season, adding up to a total of 13 games. One of the keys to the 2000-01 team’s success was the health of their team, as their top five scorers played in every game. Berry will have to search for ways to keep his guys fresh in order to set them up for success heading into the final games of the season and hopefully, another NCAA tournament.

If the Hawks tighten up their defensive play, keep star players healthy, and win crucial games down the stretch, the likelihood of another NCAA tournament appearance is high and as long as that happens, anything is possible, including UND’s ninth national championship.